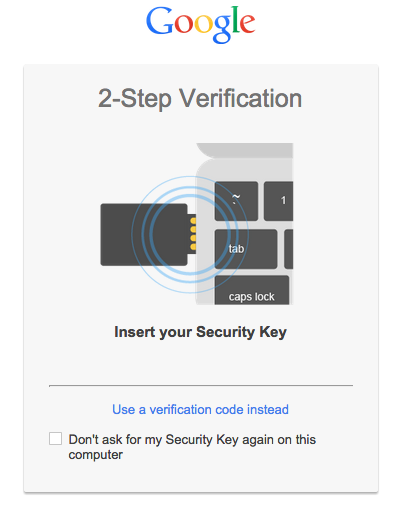 Online world appears to be calm and peaceful environment where trends and trolls are happening at every given moment for the joys and entertainment of millions. Security of the people has become a major concern for every tech firm on the planet and Google is going to do something about it. Google has come up with a secure log in process which will protect high profile users from the risky online attacks. This feature is simply titled Google Advance Protection which specifically focuses on defending users against variety of prevalent online attacks like, accidental sharing, phishing and unwanted access to the accounts.  Google is introducing this feature for a specific group of users such as journalists who requires protecting their communication or election campaign staffers during the grueling election season.

Google Advanced Protection will make use of the Security Keys which are simply some small USB or wireless devices specifically required to log-in to the accounts. Google has stated this is the most secure version of its popular two-factor authentication system wherein it makes use of public key cryptography along with the digital signatures. Both of these signatures help in confirming person’s identity thereby allowing the access to the account.

Security Keys in the form of physical devices might be too much for some users as carrying more and more gadgets wouldn’t be the ideal choice for some. In Google Advance Protection defense Google has stated that Security Keys is meant for those who don’t mind having to carry around some physical gadget to boost their security. This Security Keys can be used with the Chrome browser on desktop and for using the Google apps but it will not work with iPhone’s very own apps such as mail, contacts and calendar.

Heightened security is core of the Google Advance Protection feature

Google Advanced Protection feature gives its due focus on the security of the user’s profiles and accounts by adding extra layers. For instance people making use of this feature will get some extra steps embedded in the account recovery process in order thwart any attempt at unwanted access to the account by manipulating account recovery options. The extra layers here will consistent of additional reviews as well as requests generating questions over how the user lost the access to the account in the first place. Google Advanced Protection automatically limits the users’ complete access to some of the specific Google apps like Gmail and Drive.

Google has boosted the Gmail security feature in the past and had even introduced the two-factor authentication tool way earlier to counter growing online attacks on the users. After the much publicized John Podesta’s Gmail account hack in the year 2016 during the election campaign Google has decided to upgrade its two-form authentication tool to the next level. Google Advanced Protection is a result of those efforts and this feature is available to every user with a regular account.