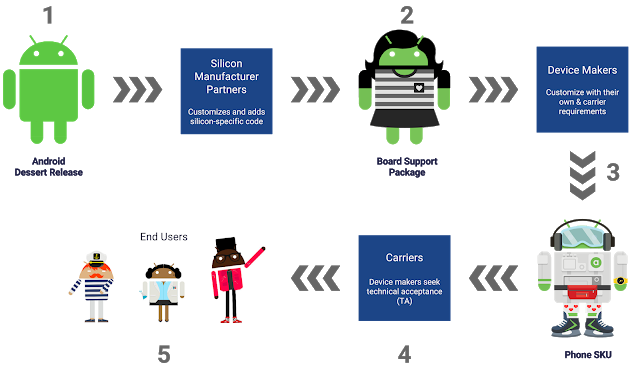 Project Treble to be launched by Google’s Android

Google is on the continuous prowl for ways to make Android better. This time they are in the process of launching project treble, which will supposedly make updating to a new version of OS much easier. While at present the entire process of updating an android phone to the latest version is time consuming and costly, project treble aims to remove these impediments.

All users of Android O and above will be getting this new feature that will supposedly make app developers and the silicon and device manufacturers kind’s life all the more simpler. Project treble is poised to be the “biggest change to a low level system to date” in the words of Google.

Understanding an Android’s release and how Project Treble is going to help:

Step one- Android or the team behind it to be more precise, publishes an open source code to the world. Then silicon manufacturers or the chip makers, take that code and modify it to support their own chip’s hardware. From there it is onto device makers or the makers of smartphones and such, that again modify that code to suit their own device’s hardware. Finally, the device makers in close collaboration with carriers, test the new code and finally release it to the public.

So, this is where project treble comes in. Google’s project treble is all set to make this entire process much faster and less costly for all those involved in bringing the updated OS to the ultimate user.

Making it all standard for vendors with Project Treble:

When android was first released back in 2007, the team behind android wanted to make a structured framework that would be followed by app developers worldwide. This would make apps standardised across all android devices and all devices that use the android framework.

This is what treble aims to do but in this case it is the source code rather than app’s API that will be standardised. This will essentially separate the original source code released by the Android team from the vendor’s modified versions.

How will Project Treble be Implemented?

A new vendor interface will be launched by Android that will lie between the original Android OS and the vendor’s implementation of it.

What is the current situation without Project Treble?

At present without project treble, a lot of code needs to be updated when a new version of Android is released, making it a very expensive and time- consuming affair.

Now, with treble, vendors will have access to hardware specific parts, this means that device makers can deliver the latest in an Android release without requiring specific work from silicon or chip manufacturers. Project Treble is running on the developer preview of O currently.