Byton is a Chinese based company that unveiled its electric car at the Consumer Electronic Show. Byton will be launching its electric car, the futuristic smart car in 2019. The smart car was created by former engineers from BMW and Apple. Byton actually comes from the phrase, ‘Bytes on Wheels’

Byton has been equipped with smart technology that will enable autonomous driving. It provides for interaction of the driver and passengers with the smart display panel present in the car. This can be done via touch, voice control or gestures.

This car has been pitted against the smart car produced by Tesla’s Model 3, which has been selling for $35,000. Tesla has 8,496 super charging points globally, while Byton has none. It is seeking to get their cars to be charged at the Tesla charging points. Tesla is willing to accommodate Byton at a cost.

On the inside of the Byton smart car, there is a huge touchscreen that occupies the space of the dashboard. This display panel stretches from end to end. This display panel will serve as an active interface for the driver and passengers. During the day, the display is bright white and at night it tones down to cause less distraction. The display can show video clips, calendars, health data and much more.

When the Byton smart car is in fully self-driving mode or stationary, the front seats can rotate inwards at an angle of 12 degrees to provide a comfortable position for interaction.

An 8 inch tablet has been embedded in the steering wheel.

The Main display unit and the tablet can be controlled by a combination of facial recognition, voice activation and gestures. The gestures will be read by cameras that are located below the center of the dashboard. The cameras can determine who you are, upload your profile, adjust the driver’s seat and other customized actions.

The Byton smart car is also equipped with screens on the back of each front seat to entertain the extra passengers.

In its production version, Byton is promising only up to Level 3 capabilities, which is somewhere between a car with a driver and fully autonomous driving. It actually means that the car can drive itself , but the driver has to be alert and be in control of the situation at all  times. After 2020, they will raise it up to Level 4 autonomy, whereby the driver can actually go to sleep. 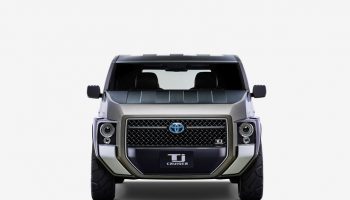