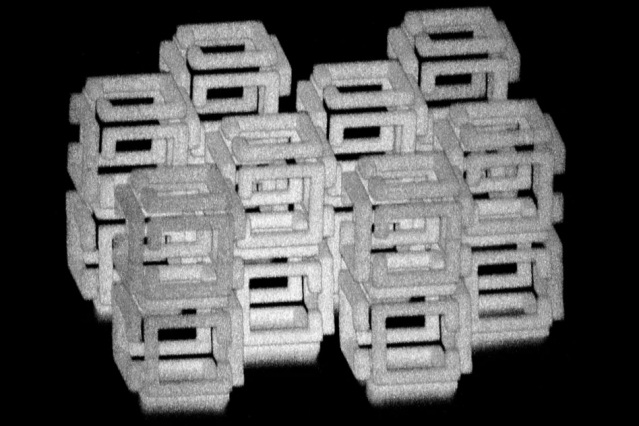 The scientists from MIT have discovered a novel way of creating 3-D nanoscale objects. They shrink objects to the nanoscale by making a larger structure with a laser and then shrinking it. It produces 3-D structures that are one thousandth the size of the original.

They are able to shrink objects to the nanoscale of almost any shape. The objects can be patterned with useful materials, including metals, quantum dots and DNA.

According to Edward Boyden, the Y. Eva Tan Professor in Neurotechnology and an associate professor of biological engineering and of brain and cognitive sciences at MIT, you can put any kind of material into a 3-D pattern with nanoscale precision.

This is a technique called Implosion Fabricaton, whereby the researchers pattern a polymer with a laser and create any shape and structure. Useful materials are then added to the polymer and later on it is shrunk to give a structure that is one thousandth the size of the original.

Earlier, there were ways of shrink objects to the nanoscale, but they have generally been very slow and ineffective. Layer upon layer needed to be added upon the 2-D nanostructures or just have pyramid like structures. There is a method to directly print 3-D nanoscale objects, but that is only with materials like polymers and plastics, which is not suitable for many applications. But that is not enough for complex structures like linked chains or hollow structures. To shrink objects to the nanoscale and for nanofabrication to reach its potential, it should also be able to work with complicated shapes.

The procedure to shrink objects to the nanoscale

When the process was reversed, then the scientists were able to create large objects embedded in expanded hydrogels and then shrink objects to the nanoscale. This was known as implosion fabrication.

They used a very absorbent material made of polyacrylate, found in diapers for the nanofabrication process. The polyacrylate was soaked in a solution containing fluorescein molecules, an orange dye with yellow-green fluorescence used as a scientific marker. They act as anchors that can bind to other types of molecules.

You can attach light to any part of the anchors and also anything else like a quantum dot, DNA or a gold nanoparticle. With the fluorescein in place, an acid is added to prevent negative charges in the polyacrylate gel. They no longer repel each other thereby causing the gel to contract. There is ten times shrinkage in each dimension which equals a thousand fold reduction in volume. In this way they could shrink objects to the nanoscale.

Though there have been attempts to invent better equipment to make nanomaterials, Samuel Rodriques, a lead author and grad student says that just using the existing systems and embedding it in this gel, you can shrink objects to the nanoscale.

When you shrink objects to the nanoscale, then there is great potential for widespread applications. Specialized lenses that are shrunk can be used to study fundamental properties of light. They could be used for cellphone cameras and microscopes. The process to shrink objects to the nanoscale could be useful in the future for creating nanorobots.