With the help of Google’s recently launched google World Wonders Project, you can now discover 100 famous historical and cultural sites in 18 countries around the world via the web. These include man-made artworks such as Stonehenge, the Pompeii sites, and the historic temples of Kyoto.

Likewise, Google shows us natural sites like the Shark Bay on the west coast of Australia, the Yellowstone National Park in North America or the Ogasawara Islands in Japan. Google’s World Wonders Project looks like a small encyclopedia on the historical, cultural and natural treasures of our planet.

On discovery tour you can either go over a large, globally rotatable mouse or by drop-down menus by location or theme. Each site has an infotext, YouTube videos and images as well as three-dimensional models. Street view is a great way to explore the Palace of Versailles, Jerusalem, the Hiroshima Peace Memorial, the Gulf of California or the Swiss Alps. 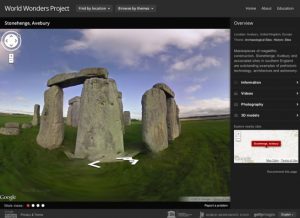 With Google’s World Wonders Project, you will discover historical monuments and impressive landscapes online. Now you can visit the Grand Canyon by Street View

Google reveals the world to you: After having first mapped maps, then photographed and finally made accessible, the California Company now digitizes the rest of the world – or at least all the places to visit.

Recently, Google has also digitized the Grand Canyon as part of the Google Project. The Google camera guides visitors virtually a trail that provides unique panoramic views. The Grand Canyon is located in the US state of Arizona, is one of the landmarks of the United States. Now you can view the spectacular scenery from your PC.

Thanks to the google World Wonders Project, you can now discover 132 historical places in 18 countries as well as special landscapes. Google employees photographed the places with camera-mounted cars and bicycles, so that they can be seen at the computer in panoramic view – some even in 3D. To the right of the Panoramic images there is additional information about the places: YouTube videos, further photos as well as texts, which partly developed in cooperation with organizations such as the UNESCO.

Melanie Blaschke, product manager of the project, writes that World Wonders is part of Google’s commitment to preserving culture on the Internet. The aim is to make culture accessible to everyone. Google publishes high-resolution images of the Dead Sea scrolls, digitizes archives of celebrities such as Nelson Mandela, and shows thousands of art works at the Art Project.

Many official information and images have been created in collaboration with UNESCO, the World Monuments Fund, Getty Images and Our place. Google stresses that the World Wonders Project should serve as an educational resource for students, students and scholars. They wanted to be committed to “preserving culture online and making it accessible to everyone”. Even for teaching purposes, one would like to make selected compilations of teaching material available for download.