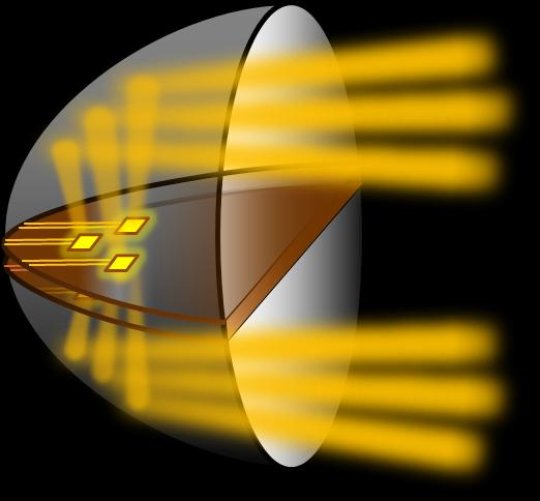 The current form of illumination used in train headlight are not energy efficient and give off a lot of heat. Researchers are now looking for alternative methods to illuminate train headlight that are not only energy efficient but also give off less heat. Researchers have now come up with LEDs as a solution to be used in train headlight. This solution will not only give the desired power of light and over a longer distance but will also reduce green- house gas carbon dioxide emissions by 152 kilograms per year if the lights are used for 8 hours in a day.

How did scientists come up with a way to use LEDs in Train Headlight?

Using LEDs as a light source in train headlight means that trains will meet the standard required for them to illuminate the tracks ahead of them as well as getting the benefits of using LED lights. LED lights give off more power, consuming less energy and they are more rugged than other forms of light. They are also known to last longer than other conventional forms of lighting.

Researchers have come up with a design of placing the LED lights in such a way as to give maximum output of light but with consuming lesser amount of energy. This new design of LED train headlight use 20.18 Watts as opposed to several hundred Watts of energy consumed by current train headlights giving off the same amount of power.

Another advantage in using a number of LEDs in train headlights is that they can be dimmed by switching off a few of the lights when the train approaches a platform so as not to blind the people on the platform.

How was the LED Train Headlight made?

Researchers had to balance using a less number of LED lights to give off a strong beam of light, using these LED lights in combination with the parabolic reflectors and also ensuring the LED lights did not become too hot to prevent any circuit damage.

Finally they came up with a solution which uses two half circular parabolic aluminized reflectors in making LED train headlight. This design solved two problems. The new design not only gave the desired amount of power using less number of LEDs but also ensured that the train head light did not get too hot and damaged the circuit. This design also left room for the circuit, that is needed to power the LEDs, to be placed in the middle of the two half parabolic reflectors.