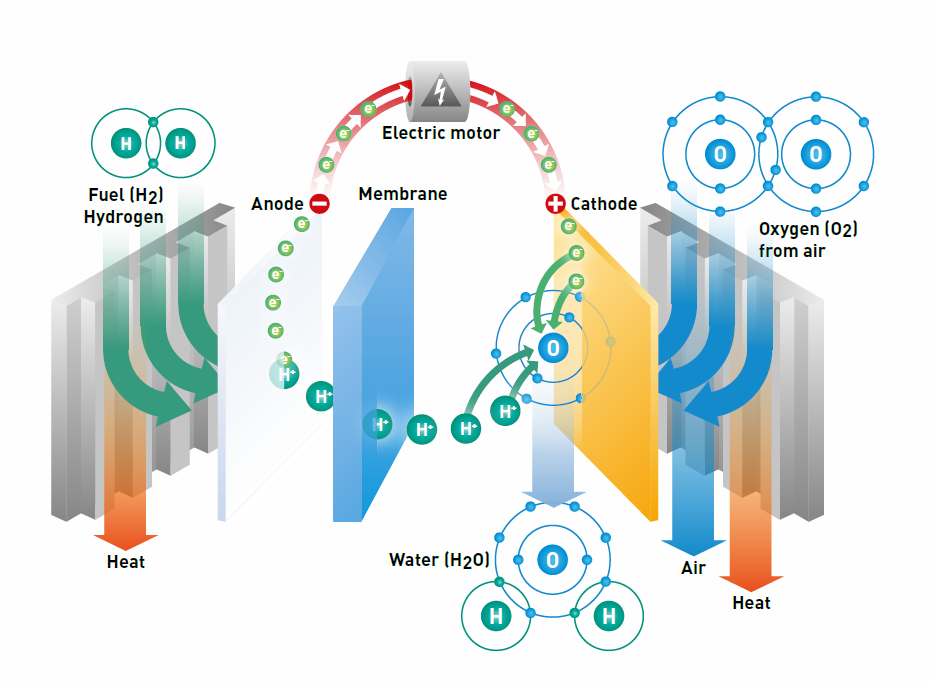 In Trondheim, Norway, heavy weight automobiles will be driving from place to place powered by hydrogen developed from solar power and emitting pure water vapour as `exhaust’.  Hydrogen technology will not only transform road transport but will also permits ships and trains to run emission-free.  The role of Norway as a pioneer in the field of hydrogen technology began over a century ago at a waterfall where in the steep mountain valley of Rjukan, an engineer and a business acknowledged the prospective of the Vemork hydroelectric power station as a means of ensuring food production for an increasing population.

Kristian Birkeland and Sam Eyde needed to construct a factory in order to manufacture Norwegian fertilizers giving it a brand name of Norsk Hydro. An architecturally innovative hydrogen factory had been constructed next to the power station and after the completion of the same in 1929; it had become an attraction for the tourist between the steep mountains of Rjukan.

The research committee is said to have contributed in playing an important role in what has turned out to be a major Norwegian electrochemical industry.

Presently, top secret technology is in progress, behind closed doors at SINTEF which is being funded by various Norwegian together with international industrial companies inclusive of the suppliers of electrolysis technology for the purpose of hydrogen production.

NTNU and SINTEF recently had won a contract with a manufacturer of fuel cell electric vehicles which tends to run on hydrogen, emitting water vapour.Since 1980s they had been working in developing fuel cell technology and in recent years, at SINTEF, the research and development activities had contributed to some major inventions.

Vice-President Marketing, Steffen Moller-Holst at SINTEF had commented that fuel cells had already become competitive in some niche markets. He further stated that that in Japan, 150,000 fuel cells had been installed in household in order to generate power and heat and in U.S. over 10,000 H2-powered forklifts have been operating in warehouses together with distribution centres.

He and his research colleagues have been actively working in implementing H2 technology in Norway with their focus on the transport segment.  Presently the project portfolio of SINTEF includes heavy-duty trucks, ferries and forklifts. Moller Holst had stated that in Germany, the first fuel cell train had already undergone trials and Norway is one of the several European countries which is now speculating on hydrogen-powered trains based on the conclusion of a study carried out by SINTEF for the Norwegian Railroad Administration.

Advanced countries in Asia have taken the lead in commercializing fuel cells to control passenger cars. Presently Japanese and Korean car manufacturers are the world leaders in technological changeover initiated by the challenges of global warming. According to Moller-Holst, since 2010, SINTEF had been involved in 20 hydrogen-related EU-subsidized projects and around half of it still tends to be running.  This had made SINTEF a substantial player in a European environment.

The main investment is done by Japanese for hydrogen and its good news for SINTEF researchers who are already closely involved with some of the main players in the country.The reason for Japan to invest in hydrogen is that over 90% of the energy demand of the country is presently covered by imported fossil energy sources and hence the Japanese are not interested only in hydrogen as a fuel for transport but for stationary power generation also.

To reduce the greenhouse gas emissions, they have agreed with Australia to import hydrogen from 2020. Moller-Holst had stated that SINTEF had been involved scientifically as well as politically, in promoting Norway as a hydrogen supplier to Japan established on their extensive energy resources.

The transport in fact has not been the only segment wherein H2 tends to play an important role.  All over the globe there are countries organising an increased number of wind farms as well as photovoltaic power plants.

But it is possible neither at all times to utilise all the wind power which tends to be generated when it is windy nor from the sun when it is sunny.  Surplus electricity needs to be stockpiled, making producing of hydrogen an appealing alternative. Moller-Holst had informed that the German industrial giant Siemens had concluded that hydrogen seems to be the best storage option for energy capacities over 10 GWh.

Over 30% of the power generation is covered by wind and solar sources in Germany and pilot testing of hydrogen as a storage medium is well in progress. He is convinced that to meet emission targets, considering several applications are essential inclusive of goods transport by road, rail and ship.

None of the technology can contend with it when it comes to emission-free long-haul transport.  Hence Norway’s largest food wholesaler, ASKO is focusing in having its first hydrogen-powered delivery trucks on the roads by 2018.

In doing so, it tends to be the first carrier in Europe with a small fleet of heavy-duty hydrogen vehicles where SINTEF had assisted in initiating and has also worked closely with this effort.  Anders Odegard the project manager works at Department of Sustainable energy Technology of SINTEF.

Odegard informed that the use of batteries powering heavy duty trucks could be expensive.  They would also be large and heavy that the payload capacity of the trucks would be significantly reduced and that they need to obey the laws of physics, respecting material related constraints.

We can say without a doubt that electrical drive trains would be replacing conventional mechanical fossil-based propulsion in the future and batteries will become very important in every transport segments.  But hydrogen tends to be progressively a good option if vehicles tend to be heavier having longer distance to cover. Presently NTNU and SINTEF are contributing decision support to TrenderEnergi as a part of evaluation of the company on the prospect of generating hydrogen from the surplus wind energy according to Moller-Holst.

Moreover, several other stakeholders all over Norway are also making same valuations regarding hydrogen production.  This comprises of Glomfiord at hydroelectric power plant which had been a Gemini plant to that at Rjukan and is said to be the cradle of the industrial boom developed close to a century back when Norsk Hydro had begun producing hydrogen for fertilizers.

Hands on With Google Visual Search for Android